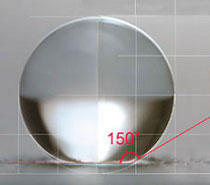 Up until now, water-repellent coatings afforded a maximum contact angle between an object and water droplets of approximately 100°. The Super Water-Repellent Material HIREC provides a contact angle of 150° or more, resulting in higher performance and long-term stability. On top of that, this breakthrough coating also demonstrates superior effectiveness in preventing adhesion of snow, ice, and other substances besides water. The Super Water-Repellent Material HIREC is expected to contribute to higher performance and durability, while maintaining the attractiveness of products in a wide range of fields, particularly communications equipment. 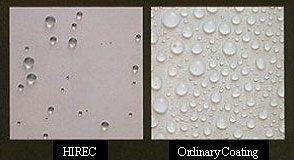 The most important feature of the Super Water-Repellent Material HIREC is that it keeps water away. Super water-repellent properties are completely different from the properties of waterproofing that prevent water from permeating. HIREC repels water and shows excellent water-repellent properties with a contact angle of 150° or more between an object and water droplets. When water droplets fall on HIREC-coated surfaces, they instantaneously disperse into smaller droplets, as if they are repelled. The water droplets remaining on the coated surfaces are round and maintain a spherical shape as if they are standing-up. These excellent properties of HIREC are expected to bring a wide range of benefits to various industries and everyday life.

Watch water being repelled below.

Selected to match your use, HIREC Series brings a new level of higher performance.

A broad lineup of high repellent HIREC has been developed for a wide range of uses and applications. You can select the product that best meets your needs.

Troubled by water, snow, ice or icicles? We can propose new preventative measures for you.

HIREC 100 contains a small amount of titanium dioxide, which serves as a photo-catalyst, keeping coated surfaces like new. With this antifouling character, deterioration due to air pollution is greatly reduced. The recommended coating thickness is approx 30 µm and the repelling character will be maintained for approx 3 years. The coating is opaque. (can be colored)

As HIREC 450 has high adhesion to a wide range of materials, the base coat isn't required. It is very effective to prevent the accumulation of ice. The coating is semi-translucent white.
( HIREC 450 has no antifouling character, so the repellent characteristic will be reduced if the surface deteriorates.)

For touch-up of HIREC450
(The spray gas has been changed to LPG. )

Look at the examples of various applications for the Super Water-Repellent Material HIREC.

Demonstration [1] Water can be dipped using a tea strainer.

When water was poured into a tea strainer coated with this super water-repellent material, it was evident that the water remained in the strainer.

Demonstration [3] HIREC easily distinguishes the water level of a river.

When a HIREC-coated copper wire was immersed in water, it was unaffected by the resistance of water.

When two copper wires were affixed to a glass plate coated with HIREC and immersed in water, the space between the copper wires exhibited no change in resistance. The space was tested using a mega-ohm-meter (resistance-measuring device.)

For example, when HIREC is coated over a printed circuit board, it prevents insulation degradation due to condensation, etc.

* HIREC's insulation properties are above 1,000 mega-ohms. 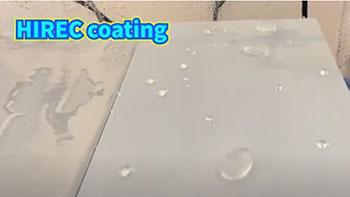 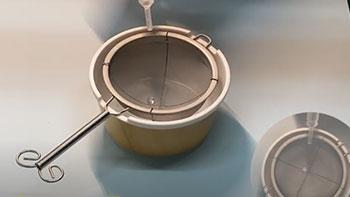 Scooping water by a tea strainer coated with HIREC. (1:23)
watch the video 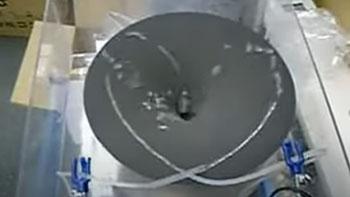 Water flowing into a HIREC-coated sink model. (0:15)
watch the video